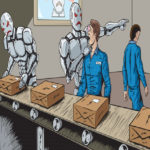 The above is a very interesting phenomenon and development trend that is also reflected in the rest of today’s modern place of work.

The trend – in itself – poses a paradox. Machines are increasingly doing the work for us. Why doesn’t this make our labor redundant and our skills obsolete? Why are there still so many jobs openings available?

The following talk, delivered by David Autor (September 2016 at TEDx Cambridge) provide some understanding and insight as to ‘Why this paradox exists?‘. In his talk, David, attempt to answer that question, and along the way, also provide some indication what this means for the future of work and the challenges that automation does and does not pose for the modern workplace… now and in the future.